I wanted to share this super easy recipe for bean chili/bean dip! We intended it to be vegetarian chili, but when we were done it ended up being more dip-like. Which ended up being awesome!
Steven and I made this on the big snow day, and it was a wonderful thing to smell this delicious meal bubbling away on the stove while watching the snow fall outside.

You can basically choose any bean combination you want- we went with two of our favorites plus chili beans because it seemed fitting. 😉
Two cans of diced tomatoes
One can of corn
One pack cream cheese

Drain off most of the water in the cans and dump everything except the cream cheese into a large pot.

Mix together and let simmer on low heat until the beans are soft. I cooked it for about an hour, but 30 minutes or so probably would have been enough.
Remove from heat and soften the cream cheese in the microwave.
Cut the cream cheese into small chunks and stir into the beans until completely incorporated.

Add your favorite spices/seasonings, as much or as little as you like. 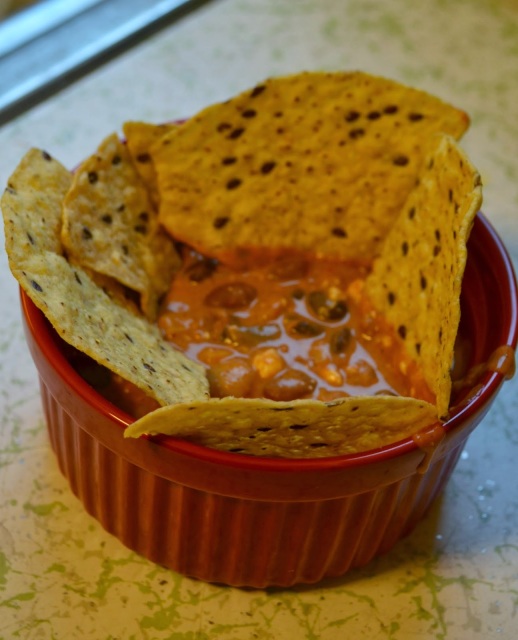 And it’s ready to eat!  It tastes great by itself or with tortilla chips.
The great thing about this meal is that you  don’t have to be exact while making it. If you don’t like corn, don’t put it in, if you really like tomatoes, put in three cans! If you can’t decide on just three types of beans, use five types! (This almost happened to us!)